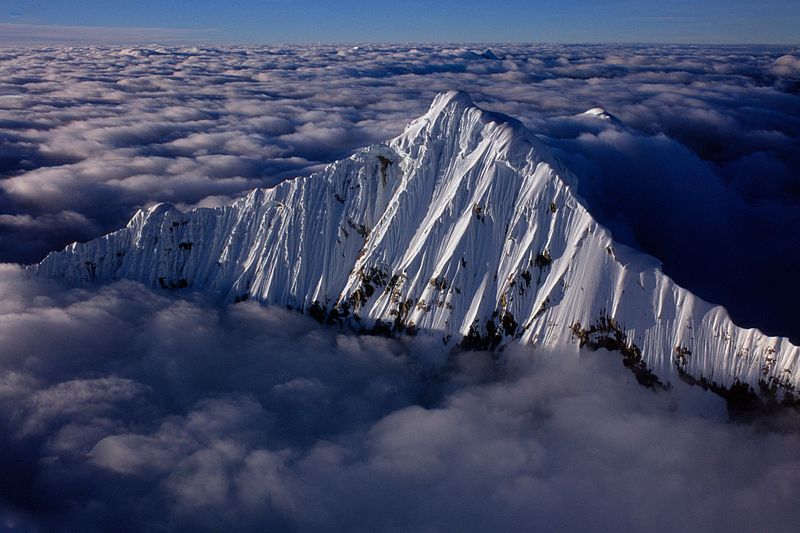 Siula Grande is a distinctive peak, which is located in Peruvian Andes. It is a part of the Waywash mountain range, and the height of its peak is 6.344 meters (20.814 ft) above the sea level. The mount has got another peak (or a sub-peak), known as the Siula Chio, with the height being 6.240 meters (20.260 ft). History of one climber, Joe Simpson, was recorded into a book, which he published after the descent. The book under the name ‘Touching the Void’ appeared in 1985, while the film, based on the true story, was shot in 2003. The key role in the plot belongs to the climber and the mount, since the ascent took place through the West face, and the author, as well as his partner, Simon Yates, became the first people to gain the top by this route. During the descend through the Northern Ridge the weather became worse, which caused into serious injury of one of the climbers.

The first people to ever step on the peak of Siula Grande were two Australian climbers, Erwin Schneider and Arnold Awerzger, who managed to climb the mount through its North Ridge. The latest researches show a curious tendency of rapid changes in the glaciers, which are located on the mountain. Glaciers increase in their size and change shapes, that is why the routes, which were used to climb the mount in the 70s now are dangerous and even impracticable.

Isn't this impressive? Share these emotions with your friends on a social network. Choose where you have an account: >> Go to the beginning